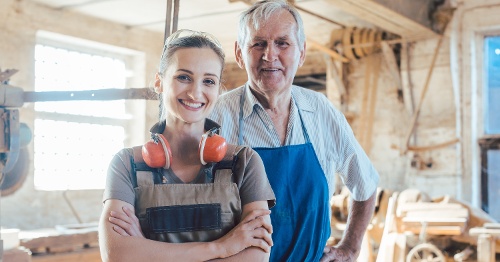 Family-owned companies have faced notable turbulence in recent years. Nearly 65% of these firms saw their revenues decline during the pandemic, according to KPMG. They also faced intensifying competition from publicly-traded and private equity-held businesses.

Multi-generational ownership transfers traditionally afforded long-term stability, but that’s no longer a given. According to research by SCORE, only one-third of family businesses will survive the transition from first- to second-generation ownership. That number drops further in subsequent generations.

The entire webinar, as well as highlighted content, is posted below. Our friends at Vistage have graciously made this recording available to all. "A minority ESOP transaction can enable a shareholder to sell a portion of their holdings to an employee trust, get cash off the table... and secure corporate deductions equal to the sale value. Post-transaction, they can gift shares to family members in a tax-advantaged manner."

"So now you have a business that's part ESOP-owned, part next generation family-owned, and everyone can benefit in the future." "The biggest difference is who's going to own the stock after the transaction. In one case, you have a private equity firm... that has no connection to the employees and no connection the community. Their goal is to maximize return on investment."

"Looking at the long term future, who do you want to reward... your employees or a third party?" "If the selling shareholder is going to elect 1042 – and they're not going to pay capital gains taxes on their transaction – then their direct descendants cannot participate in the ESOP."

"But when you look at the greater value that's being generated by 1042, owners can get benefits to the next generation, outside of the ESOP." "Probably 60% of the ESOPs we work on... involve selling a minority piece of the business to employees. That means the balance of equity, whether it's held by an individual or a trust... is held by the family."

"And when employees leave, the company makes a market and buys back their stock... the company can put those shares into treasury and, over time, the ESOP's ownership of the company shrinks. Eventually it becomes a 100% family-owned business again."